Visit your area of interest by selecting from the list of buttons below.

Actor Steve Way of the Hulu series “Ramy” talks about how the show came together and his thoughts about non-disabled actors playing characters with disabilities. You don’t want to miss this.

Actor Steve Way of the Hulu series “Ramy” talks about the importance of giving voice to the often left out stories. His comments couldn’t be more timely. Every story needs to be told. (part 2)

Ali Stroker, is the first actor who uses a wheelchair to win a Tony Award for her role in Oklahoma. Ali talks about the importance of role models and representation of disabilities in media.

Ali Stroker, the first disabled actor to ever win a Tony Award, discusses the steps she took to get to Broadway. (part 2)

Shoshannah Stern, an actor, writer and co-creator of the Sundance series “This Close” with Josh Feldman, explains how they took the concept for the show all the way to fruition.

Shoshannah Stern, an actor and the co-creator wtih Josh Feldman of the Sundance Series, “This Close” talks about the importance of representation. (part 2)

NCIS: New Orleans writer Katherine Beattie talks about the myths of working with a writer with disabilities on a TV show.

Katherine Beattie, a writer on the TV show NCIS: New Orleans shares how to break into the entertainment industry. (Part 2)

Jim LeBrecht and Nicole Newnham the co-writers, co-directors and producers of the Netflix award winning documentary Crip Camp discuss how to break into the entertainment business.

Nicole Newnham, co-writer, co-director and producer of the award winning Netflix documentary “Crip Camp” talks about her disabilities “awakening” while working on the Obama produced documentary.

Written by Deborah Calla and Allen Rucker with the support of the WGA’s Writers with Disabilities Committee and Easterseals Disabilities Services, the Employing Writers With Disabilities: A Best Practices Guide, aims at demystifying the process of interviewing, hiring and working with writers with disabilities. The guide also makes suggestions on how to greater include disability in storytelling and portrayal.

On November 14, 2019, The Media Access Awards announced the inaugural Disability List, created in partnership with the The Black List, Easterseals Southern California, and the Writers Guild of America Writers with Disabilities Committee.

The Disability List is a curated list of the most promising unproduced scripts featuring at least one lead character with a disability. It is the first list of its kind that aims to specifically identify scripts that further disability representation onscreen.

The disability community is the largest minority group in America, making up 25 percent of the population (61 million Americans), yet is only represented in less than 3 percent of onscreen roles. The scripts on The Disability List represent the type of stories that the disabled community would like to see studios producing.

“Inclusion in Hollywood and authenticity in storytelling, starts in the writers’ room,” said Deborah Calla and Allen Rucker, Co-CEOs of the Media Access Awards and members of WGA Writers with Disabilities Committee. “We are honored to work with The Black List to spotlight these incredible scripts in hopes of advancing the portrayal of people with disabilities.”

“With the proper attention, and with the collaboration of the right directors and actors, we believe these scripts show tremendous promise. We hope to see them become films that will both entertain audiences and impact hearts and minds around the world,” continued Franklin Leonard, founder of The Black List.

“Our goal is a world in which everyone feels 100 percent included and empowered, and Hollywood has an important role to play in making that happen,” remarked Mark Whitley, CEO of Easterseals Southern California. “By highlighting people with disabilities through storytelling, we shape perceptions of this minority group and create a more inclusive society. We thank The Black List for bringing these great stories to the forefront.”

Scripts were sourced via The Black List or by the participating organizations, and feature at least one disabled character with a prominent role.

The Disability List along with the Best Practices Guide for Hiring Disabled Writers, which was created by the Media Access Awards with the support of Easterseals Southern California and the WGA Writers with Disabilities Committee, together make great strides in facilitating the creation of content that is more inclusive of the disability experience. 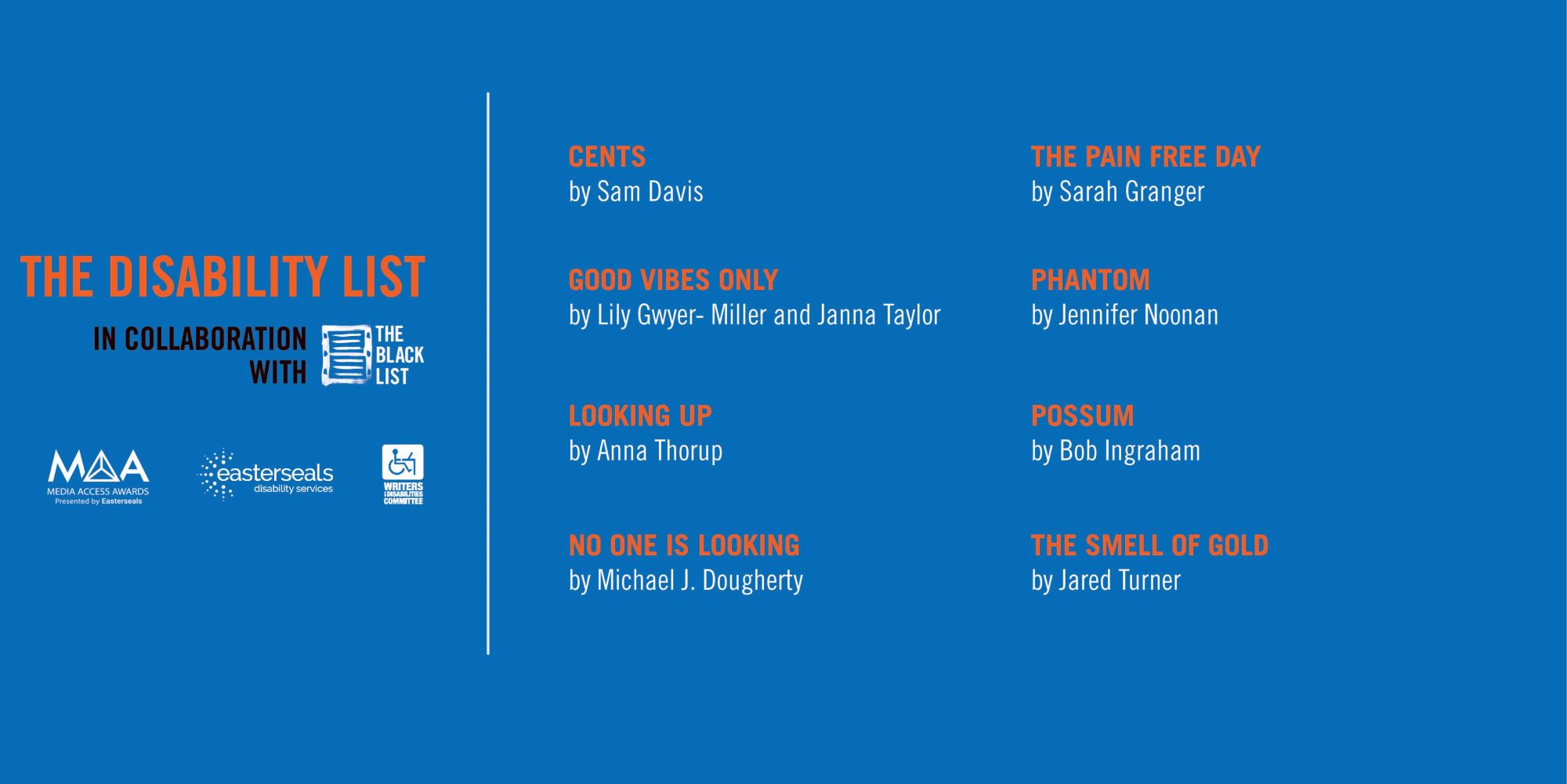 The eight scripts selected for the 2020 Disability List include:

NO ONE IS LOOKING by Michael J. Dougherty: Sam, a physically challenged high schooler, kills a bully and thinks he got away with it because no one would believe a kid in a wheelchair would be capable of that, but he must find the bully’s missing severed head before anyone finds out about the murder.

POSSUM by Bob Ingraham: When a band of thieves targets a charity for the disabled, the father of one of the disabled residents must find a way to thwart their plans.

GOOD VIBES ONLY by Lily Gwyer-Miller and Janna Taylor: Afraid to tell her bubbly best friend about her recent cancer diagnosis, a cranky TV director turns to a cancer support group. There she meets a diverse group of women who help each other through real-life problems that can’t be solved with good vibes

THE PAIN FREE DAY by Sarah Granger: After struggling for years housebound with severe pelvic pain, a dejected mother takes a risk and pulls her teenage daughter out of school for one day in an attempt to mend their strained relationship.

THE SMELL OF GOLD by Jared Turner: After her husband is murdered in cold blood, a tenacious, young Scotswoman, with the help of an English tracker and his Maori son, sets out across the wild New Zealand landscape in pursuit of the accused, a reclusive Chinese goldminer. All the while, they must fight to stay ahead of a vicious gang who are desperate to claim the bounty.

LOOKING UP by Anna Thorup: Anna Thorup is a wheelchair-using, LA-based comedy / dramedy writer. Her past work experiences include time spent at DreamWorks Animation and Netflix.

CENTS by Sam David: Frankie––a high school senior with an intellectual disability––sets a penny on the railroad tracks the morning of a freak train derailment. Assuming responsibility, he goes into hiding amidst a citywide evacuation and must survive on his own––a “fugitive” in a ghost town, with the police who “hunt” him, and a pile of combustible train cars looming.

PHANTOM by Jennifer Noonan: A double amputee combat veteran returns from Afghanistan and faces a new battle she must wage to regain herself.

The ten scripts selected for the inaugural 2019 Disability List include:

BILLY BARTY’S BIG DREAM by Nic Novicki: In 1957, the resilient and charming little person actor Billy Barty refused to be treated as a second-class citizen, and with the help of a Reno hotel started a support organization for little people. Despite Billy’s fame and success, he is still single and lonely until he meets a little person named Shirley — but he then must convince her strict Mormon family that he is a suitable match.

DEAF’UN by Cedar Miller and Kevin Thomas: Inspired by true events, DEAF’UN tells the story of a deaf/mute orphan in 19th century London who fights his way out of abject poverty in the bare-knuckle boxing ring, risking everything he loves in the process.

THE FIRST CASE by Kurt Yaeger: A teenage girl’s future becomes cursed when her family lets a wounded and dangerous stranger into their home, which attracts a far greater evil that repays their good deed with death.

HIBAKUSHA by Clifton Daniel & Kevin Podgers: After experiencing the atomic bombing of Hiroshima and its aftermath, a young Japanese girl attempting to navigate a changed world grows up to be an advocate for survivors, eventually bringing her to the United States on a mission of peace and disarmament.

HOMEFRONT by Jude Roth: HOMEFRONT follows a group of female veterans struggling to salvage their lives in America’s South who, after tragedy strikes amid their ranks, sets out to help veterans across the country.

THE MARVELOUS CRISIS OF LIVING by Erik Linthorst: A multigenerational female-driven dramedy, THE MARVELOUS CRISIS OF LIVING tells the story of a bipolar 15-year-old girl who, in a manic state, teams up with a boy with Asperger’s from her teen support group to break her beloved grandparents out of their low-end Arizona nursing home and drive the elderly couple to a better life in Idaho. But as with all “it-seemed-like-a-good-idea-at-the-time” notions, it’s not long before the ramping consequences of their actions begin crashing down.

ME & YOU by Sean Lavery: The emotional anxiety of a husband and wife struggling to raise a toddler with mild cerebral palsy manifests itself as the father being visited by two imaginary, fully grown versions of his son and the wife having actual, sentient conversations with the judgmental voices of the Internet.

SHORTCOMINGS by Nicole Evans and David Crabtree: Dr. Vickie Ziegler, a 3’8″ tall dwarf who uses a wheelchair, is a brilliant therapist who explodes into the public spotlight as a self-help guru who doesn’t practice what she preaches. Forced to navigate in a world that’s not built for her size, she gets frustrated with her small stature and acts out sexually.

UNSTABLE by Katherine Beattie: For a young woman with Cerebral Palsy, being disabled isn’t a problem — it’s her family that’s the challenge.

THE WOODHULL by Lynda Brendish: A limited series drama based on the true story of Victoria Woodhull’s radical 1872 presidential bid — and the sex scandals, hubris and patriarchal powers-that-be that prevent her success.